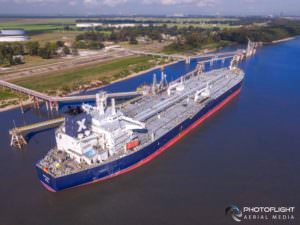 This film first screened in November 2016 at the celebration held at Athens Concert Hall, attended by Greek President, Prokopios Pavlopoulos, the country’s Prime Minister, Alexis Tsipras, and three former Prime ministers, among the some 1,800 guests who celebrated the founding of the Union.

Some of the challenges we faced during this project was planning and coordination with the ships, as they travel a long distance, and their schedules constantly change to adjust for weather, tides, harbor pilot availability, etc. We stayed in constant communication with the ship’s bridge via satellite phone, and used marine tracking app to get a better idea of the ships location. This was our second large drone video project involving tracking commercial ships, and thanks to this experience we can offer problem-free experience and incredible results to our clients in marine and shipping industries.